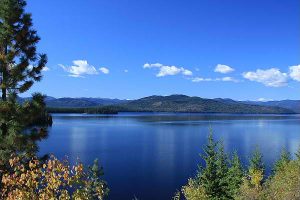 Since the 1930’s the Bretthauer family not only has worked in and around Priest Lake, but also the other beautiful lakes, like Pend Oreille, Coeur d’Alene and many other smaller lakes and rivers that make up Northern Idaho.

Starting with Great Grandpa Ed and Haitty Bretthauer Back in the 30’s, who were newly married and living in Spokane Washington, decided that they would either move their family to help construct the Coulee Dam or move to Priest River to work in the timber industry. They decided with a coin toss and Priest River won, so they ended up moving to Northern Idaho.

Since then my family has not only been part of the timber industry, which includes the last log drive from Priest Lake down the Priest River, but fought countless forest fires, like the Sundance Forest Fire back in 1967.

We’ve also constructed hundreds of miles of roads and bridges around Priest Lake, Pend Oreille and Coeur d’Alene over the years. Our company now services these areas and includes areas outside of Idaho. If you are in need of a tree removal  service in Coeur d’Alene give me a call.